Biggest losers lose a lot more than their weight 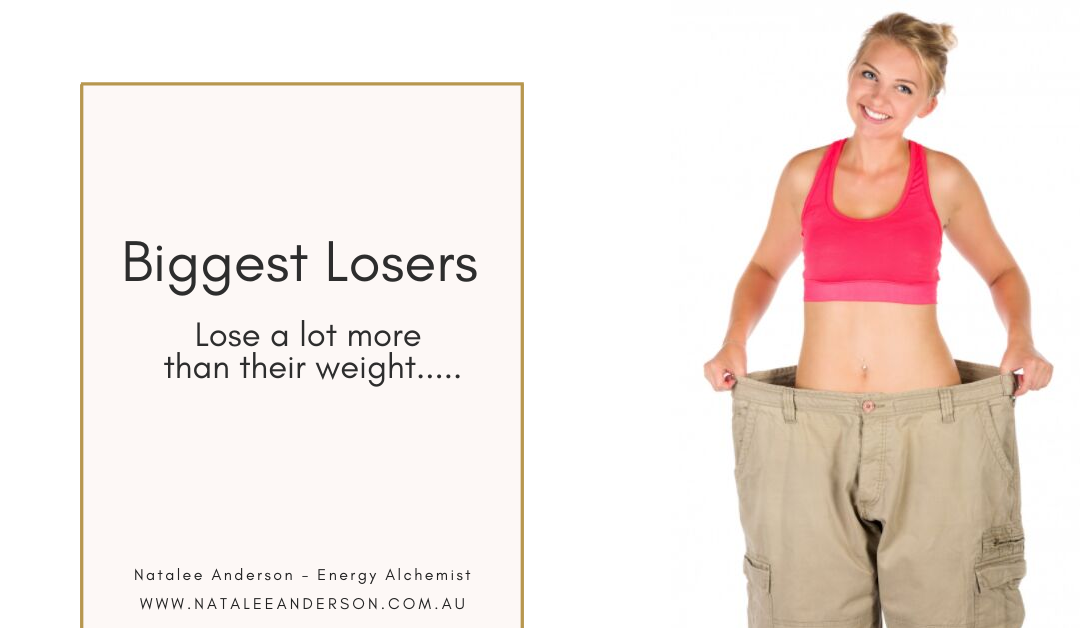 I spoke at a local event recently and I could almost feel the goosebumps, the knife cutting straight to the heart, the almost fall off your seat because you are sitting so close to the edge moment when I started talking about the 2009 biggest loser contestants.

I like to use them as an example as they so brutally paint a picture of everything that is wrong with the weight loss world. It is so far entrenched in our society, in the government, in fitness professionals, in doctors, in schools, I almost wonder if we can ever come back to reality.

So here’s what happened.

The 2009 Biggest loser contestants are on a calorie RESTRICTED diet of about 1200kcal a day for their 30 week competition. That is lowish. Have you been on a calorie restricted diet before?
Probably, most people have. Was it that low?

As a personal trainer I used to have my clients on around about 1500 kcal. These contestants were also training 6 days a week for at least 90 minutes – that’s kind of hard core. Basically biggest loser is an example of the ‘eat less, exercise more’ model of weight loss – but on steroids. Its FULL ON, and so are the RESULTS.

These contestants had a wide range of metabolic testing, before, at the end of the 30 week challenge and again 6 years later. Their results were published last year in the Obesity Journal.

I used to be a personal trainer and used this model all the time. Even when I have events that I want to look good for I find myself DEFAULTING to train hard and cut back calories. But it is wrong. This is but only one example.

But still we think the answer is as simple as calories in, calories out, eat less, exercise more.

It would be nice if weight loss was that simple, an easy equation, a-b=c. But it is not. Our body and brain is designed for survival. It WILL NOT let us starve. If we communicate messages of STARVATION through changing our ENVIRONMENT, our body will ADAPT. In this case it SLOWS down our metabolism to PRESERVE its fuel, and without help it never comes back.

A Low Carbohydrate, High Fat (LCHF) diet on the other hand INCREASE leptin, your satiety hormone. Leptin is produced not only from fat cells but also dietary fat. Eating high quality fat reduces hunger signals. Leptin can be silenced by triglycerides but we now know a LCHF diet reduces triglycerides by 50% as seen in this study by Jeff Volek and team. The key hormone preventing fat metabolism is also removed on a LCHF diet. So these studies show that a WELL FORMULATED (I personally believe most are not) LCHF diet leaves you feeling satisfied, speeds up your metabolism, removes the triglyceride barrier and unlocks fat metabolism – and that is just the beginning!

If you would like help getting started with what to eat to balance your hormones to burn fat in a generic non diet specific way, I invite you download our free fat burning meal plan HERE.

Or if you want to start uncovering the link between your metabolism and your hormones our FREE 7 Day Challenge HERE is an awesome place to start!

I am not saying do low carb, high fat, I believe there are MANY components at play.

I am suggesting we NOT STARVE ourselves to lose weight anymore because it damages the body in the long term.

I AM suggesting we ADOPT a NEW model of weight loss, a new APPROACH to health that LISTENS to our hormones and metabolism, that considers not just the role of calories and exercise on our body, health and life, but also the QUALITY of the food we eat, our LIFESTYLE, our sleep, our BELIEFS, our mindset, EMOTIONS and trauma, the CYCLES our body and lives move through, our STRESS response, the flow of ENERGY in our bodies and life, our CONNECTION with ourselves and those around us.

So much plays a role in our weight, body and health and its TIME we listen and move forward in ALIGNMENT.

When we so this weight loss is EFFORTLESS, health is ABUNDANT, our confidence EXPANDS and life is LIGHT and FREE!